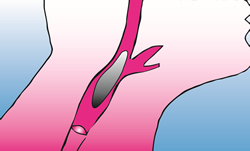 When atherosclerosis involves the major arteries to the brain, the treatment is to clean out the arteries. An incision is made in the neck, the artery is opened and the cholesterol- containing plaque removed. There is a small risk of stroke with the operative procedure itself. In addition, after surgery patients may often feel a little difficulty with talking or swallowing secondary to stretching of the nerve to the tongue.

In some patients, a stent may be used to treat the blockage in the carotid artery. The physician will decide who is a good candidate for this less invasive method. Aneurysms of the Aorta. Patients who have an aortic aneurysm should have it repaired. We do this by replacing the segment involved with a synthetic graft material. This is a major operation and there is some risk of death or heart attack. In addition, depending on the location of the aneurysm, there may be some problems with blood supply to the kidneys or the intestines. After graft placement, you should take antibiotics prior to any surgical procedures. Overall, the risk of surgery is small compared to the risk of an unrepaired aneurysm and these should be repaired.

When possible, a new endovascular technique is used for repair of AAA. A small incision is made in both groins to gain access to the femoral arteries, where a delivering device is threaded through the arteries to the aorta. The stent graft is then deployed above and below the dilated aorta. This minimally invasive approach is more cosmetic, reduces operative time, and has fewer complications. Most patients require a 1-2 day hospital stay.

Atherosclerosis can involve arteries to legs. Treatment may include minimally invasive procedures such as balloon angioplasty or placement of stents, or may require bypass surgery.

Cryoplasty is a new technique used for patients with peripheral vascular disease. During this procedure, wires are passed down the blocked artery followed by a specialized balloon. While using an x-ray machine and dye, the balloon is placed at the exact site of the stenosis or blockage. The balloon is inflated with nitrous which helps freeze the blocked artery and helps prevent restenosis. This procedure is most often done in the legs which allows for better circulation to the feet.

Some patients with kidney failure require hemodialysis, a procedure to remove waste products from the blood. To provide access for hemodialysis, we may insert a catheter into one of the neck veins or in the vein under the collarbone. For permanent access, a graft is inserted connecting an artery to a vein. This may be placed in the arm or leg. From time to time, the graft may clot and require further surgery. For some patients there may be pain in the hand from the stealing of blood flow. If this occurs, tell your doctor.